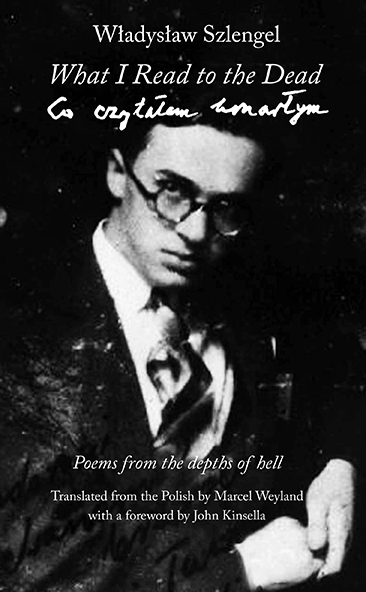 What I Read to the Dead

Wladyslaw Szlengel, a Polish poet, was interned in the Warsaw Ghetto during WWII. He wrote poems about life in the Ghetto and the future of its inhabitants.

His poems became very popular and were read out loud at meetings, and passed on from hand to hand and from mouth to mouth. When the Germans began deporting the Ghetto’s Jews to Extermination Camps, the tone of Szlengel’s poetry changed. He wrote about the fear felt by his fellow Ghetto dwellers, now that death was knocking at their doors, and about the relationship between man and God in such a situation.

His last poems deal with the deterioration of the Ghetto during its final weeks of existence. Even at that point, Szlengel continued to share his poetry with the public, in small, secret get-togethers. Szlengel was killed in April 1943 during the Warsaw Ghetto Uprising. Much of his poetry and a diary were saved – they had been buried in sealed containers, under the floor of a cellar, with other cultural artifacts, and miraculously found beneath the ruins of Warsaw. Szlengel’s final poem ‘Counter Attack’ was found later under the false top of a table which a Polish man was chopping up for fuel.  The poems were published in 1946 in a collection titled Out of the Depths.  The last lines in the diary are:

“I look through and arrange the poems written for those who are gone.  I have read these verses to warm, living people, full of belief in survival, in rebuilding ..  Read it.  This is our history.  This is what I read to the dead.”