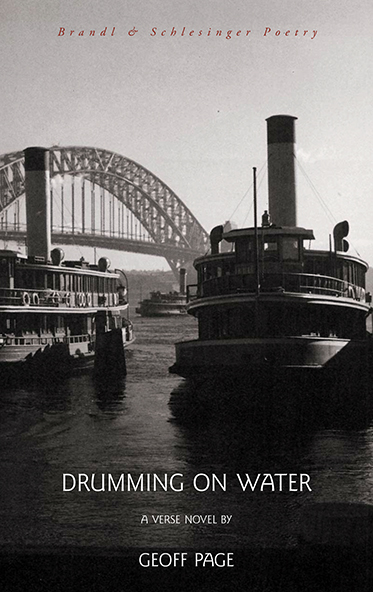 This verse novel is set in Sydney in the late 1930s and concerns a group of female dance band musicians working on the harbour ferries. Lizzy Rivers All Girl Band is on the verge of a national and international breakthrough when the lead singer, Lizzy Rivers, disappears overboard and drowns. The story is told from the viewpoint of Emma, the drummer, who becomes increasingly convinced that the group’s manager Sam is responsible (even though the inquest rules out this possibility). As the band collapses with Lizzy’s death and the advent of war, Emma, who now has a child, starts to devote herself to seeking revenge against Sam.

The book is written in verse, entirely from Emma’s point of view in her working class idiom, and tells a story not only of the numerous female dance band musicians of the time but also of the lengths to which a woman will go to seek her own version of justice. It gives a strong sense of Sydney in the late 1930s and the lively and diverse personalities who make up the band. The novel is at once a portrayal of a period and dramatic presentation of one person’s determination, against many odds, to rectify a wrong she is certain has been done.

Geoff Page is a Canberra poet who has published fifteen books of poetry, two novels, a biography, a book of short stories and poems and edited two anthologies. Among his more recent poetry collections are Collateral Damage and Darker and Lighter which won the Grace Leven Prize for 2001. His long poem, The Scarring, was published in 1999 and broadcast on ABC Radio in 2001 and 2001. He also published A Reader’s Guide to Contemporary Australian Poetry in 1995. With time off for several grants from the Literature Fund, Geoff Page ran the English Department at Narrabundah College, ACT, from 1974 to 2001. Geoff has read his...