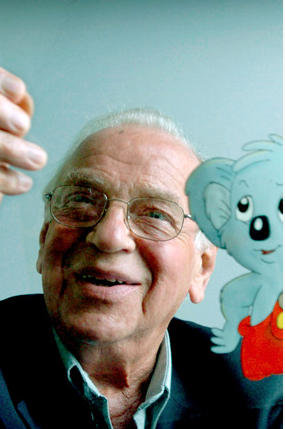 Yoran Gross is internationally acclaimed for his films that have garnered numerous awards and won the hearts of children worldwide.  Born in Poland in 1926, Yoram studied at Krakow University.  Awarded the prestigious Order of Australia in 1995, Yoram headed Australia’s most successful animation production house for over three decades. His Joseph the Dreamer was Israel’s first full-length animated feature. In 1968 he migrated to Australia, where he created such animated classics as Dot and the Kangaroo and Blinky Bill.

Yoram Gross is known as a storyteller whose distinctive, non-violent films and series possess a contemporary charm that crosses all international barriers. He successfully uses the mediums of film and television to share his life experiences. In 1975, Yoram wrote a book on making animated films titled “The First Animated Step”, and produced a film of the same title.  These invaluable education materials aid in teaching the art of animation in schools and have been in constant use since their production.